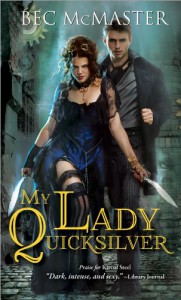 I am a sucker for a hero/villain romance. I didn't realize it til this book, but something about it just turns my engines in the right way. My Lady Quicksilver is a great example of a opposites attract story.

I'm actually going to do my SCORE even more out of order then usual. I'll stick the overview at the top as sort of a TL;DR for you all. If it interests you, you can read the rest under the jump.

This one is probably my favorite of the four books. It's just a gripping story, interesting and unique to the world leads, sexy sexy times and only one or two eye rolling tropes. I love this steampunk world and I can't wait to read more in it. If you as a lover of steampunk have not read this series yet, yeah get on that. If you just want to read this one, I'd say it's doable but some of the terms may only be sparsely explained and there are other plot threads from the past book referenced. Nothing that would spoil the other two if you read them out of order though. But yeah, I heart this one.

My Lady Qucksilver is the third book in McMaster's London Steampunk series. To be honest I haven't hated any of the three that I have read (there was a novella in there that I adored as well), but this one may be my favorite so far.

Taking place near after the events from book two, Sir Jasper Lynch, leader of the Nighthawks (a policeish type force of blue bloods.. erm vampire like men) is searching the slums of London for Mercury, the leader of the humanist rebellion. After the events of the last book forced the humanists into the ruling party, the Echelon (made up of aforementioned blue bloods), into action the pressure is on for Lynch to find him... or actually her.

Mercury is Rosalind, a die-hard humanist in charge of raising an army to fight for the rights of humans in a world run by vampires. But unfortunately, after the events of the last book again, her brother is missing so all of that must take a sideline. Even more unfortunately (fortunately?) she has Lynch on her tail.

The first scene where they meet is each other is quite hot and awesome. It leads to a sort of misunderstood enemy thing that goes on for the rest of the book. The book has a lot of plot threads going on but they overlap each other nicely. I loved being in with the Nighthawks! I was getting a little bored of the slums after the first three books were told. This book really gave the series a fresh breath.

Rosalind and Jasper are not new to us characters. Both have been subtlety introduced to us in the last two novels, especially Jasper. We knew before that he wasn't a typical blue blood, but he is sort of working the system from within to the best that he can.

Rosalind takes a different more direct approach with running the opposition effort. She is a very hands on, take advantage of a situation/what you want sort of girl and I love it! Very different from the other heroines of this series so far. I just loved her and her contradictions.

The leads play off each other well. Jasper with his dark side that he is always trying to control plays well off of Rosa's go get it nature. For her, the normality of a life out of the shadows is something that draws her to Jasper as well as the eye opening realities of what happens when we judge people without knowing them.

The secondary characters we meet are mostly new ones. We see a glimpse of Lena, but nothing substantial. I love the Nighthawk duo of Garrett and Perry and looking up the next book, those two get to be center stage! Anyway, for the brief amount of time that they were brought on, you can tell their character shines. Rosa's side of the fence though has a little more one note characters, but we don't see much of them so I can't blame that.

Yes. I liked this. Mmm. Not a huge tension building one (which I adore), but the misunderstood enemy trope executed well. These characters fit well together. I don't have much more to say for that.

One negative thing that I will say through me out of the story for a moment was a trope that I've seen used a hell of a lot: the magic hooha. Sleeping with the heroine cures all ills. I literally rolled my eyes at that. If that sort of thing is your off button, then be forewarned. It wouldn't have bothered me as much if it were explained a little more what happened instead of just the power of the vajayjay, but as it was I had to extrapolate for myself what happened so as to apply it to a later scene... yay vagueries.... let's get spoilery for a sec.

So I am clearly talking about their first sex scene where he is under the power of the drug and nothing can bring him back except her. And it didnt fade with time. It was literally him/her claiming her/him that brought him back.

Okay fine, I guess. But then later when the smoke goes off in the theater, how did everyone recover so quickly? I know Lynch had a mask on but what about Rosa's father or any of the other blue bloods? I am sure the gas was like hella powerful too. It just bugged me as a cop out loose end sort of thing.

But whatever. It's my one qualm.

The pace was good, the story engaging. I didn't have an issue with formatting or anything. I thought that this could almost pass for a standalone since McMaster does go and briefly explain some of the rules of the world again for those new to it or those who may have forgotten some stuff (me). Old plots are referenced though and could be spoiled if you dont read them in order.