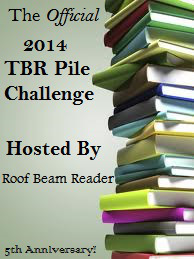 For the past three years I have participated in RoofbeamReader's TBR Pile challenge. Alas, I have as of yet not even come close to

finishing. This year will be another year that I try to meet the goal of reading and reviewing twelve books that have been on my TBR Shelf for over a year, so nothing published in 2013.

The first year I read five and reviewed two. The second year I did a just about as good, reading and reviewing four. Last year, was a bit of a step backwards, where I read three and reviewed only one.

No matter though! 2014 is a new year for all and that means new books to put on this list and actually read them!

1. Libriomancer by Jim C Hines - First year on this list, though it was on my Top Ten Books I resolve to Read in 2013 list...

2. Divergent by Veronica Roth - Second year for this one. But I want to read it to see what the fuss was about... especially with that third book.

3. I Love It When You Talk Retro: Hoochie Coochie, Double Whammy, Drop a Dime, and the Forgotten Origins of American Speech by Ralph Keyes - This one should be pretty easy as I got it for Christmas! I have been coveting it since I saw it in a store in October 2012 (wow) and when I went back to that store, it was gone. So excite!

4. Heart of Iron by Meljean Brook - I loved Iron Duke... so now lets continue the series shall we?

5. Pride and Prejudice by Jane Austen - I know guys. I know. This will be a second year repeat.

7. Heartless by Gail Carriger - I've wanted to finish this series for a while now. And Heartless was where I stopped.

8. The Black Hawk by Joanne Bourne - Another series that I want to be caught up on. I am not near this book (I only read the first and this is the fourth) but this is the one I want to read. I mean I'll read the others too, but this is why I am reading them. For Adrian's book.

9. The Seduction of Eliot McBride by Jennifer Ashley- Whew this one squeaks in with a publication date of Dec 31, 2012! But I need to read this one to again, catch up on my series (see a pattern?)

10. Sweet Deception by Heather Snow - I literally have this one sitting on a shelf in my living room for a year...

11. The Rose Garden by Susanna Kearsley - I have heard nothing but good things. It's been sitting on my ereader, the beautiful cover saying "read me!" for far too long.

12. Ruins of Lace by Iris Anthony - I saw this at the bookstore during Christmas of 2012.

14. The Magic of Ordinary Days by Ann Howard Creel - This was a TV movie that I saw and loved. I've been meaning to read the book for ages!!

Wish me luck people! If any of you guys are doing this let me know! I am going to link all my reviews in this post as per the rules, but also use the tag "2014 tbr pile challenge".